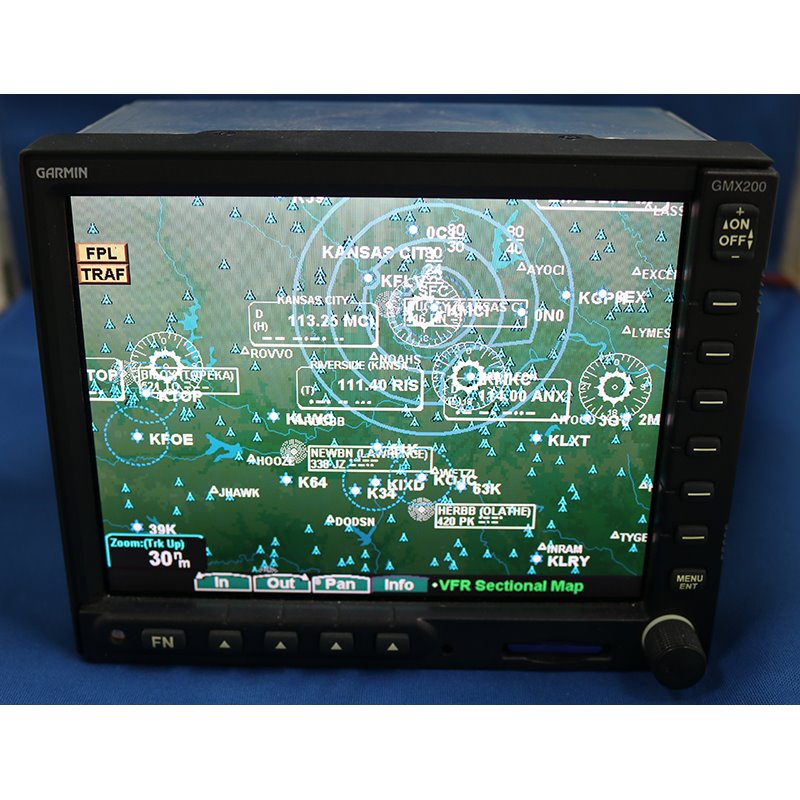 This Used, GMX 200 has a sunlight-readable, high-resolution, 640 x 480 display. In addition to its 6.5" AMLCD display, its enhanced backlighting dramatically improves color and contrast, making chart depictions and images easier to read in any light.

This unit was removed for the installation of a Garmin GTN750Xi at our Avionics shop.  Prior to removal the customer stated the unit was working correctly and we checked operation prior to the removal of the unit for the project install.

For ultimate situational awareness, the GMX 200 multi-function display (MFD) has a viewing area almost 20% larger than other panel-mounted MFDs and comes standard with FliteCharts® and SafeTaxi®. GMX 200 is available in Standard, Traffic, Radar/TAWS and Radar/Traffic for more choices in the cockpit.

GMX 200 has a sunlight-readable, high-resolution, 640 x 480 display. In addition to its 6.5" AMLCD display, its enhanced backlighting dramatically improves color and contrast, making chart depictions and images easier to read in any light.

GMX 200 has multiple functions and features that make navigation simpler:

GMX 200 is preloaded with high resolution terrain and hydrography data for the entire world, giving you unmatched presentation even at lower zoom scales. Cities, roads, rivers and lakes have been added to the basemap for improved situational awareness. An aviation database featuring Jeppesen® NavData™ draws airports, airways, navaids, airspace and more. Map scales range from 1/4 of a mile to 2,500 miles. A unique split screen mode allows you to simultaneously view 2 charting options along with the vertical profile for the elevation of the terrain along the route of flight.

Optional ChartView™ further enhances situational awareness in airport and terminal areas. Surface diagrams are automatically displayed on departure and arrival to assist with taxiing unfamiliar airports or in conditions of poor visibility. Overlay your aircraft's position on the electronic approach chart to provide a visual crosscheck. All of the ChartView plates are seamlessly stitched into the custom mapping options.

Quickly find and view all AeroNav Departure Procedures (DP), Standard Terminal Arrival Routes (STARs), approach charts and airport diagrams with FliteCharts. With FliteCharts on your GMX 200, access all U.S. approach plates currently published by NACO, which includes 14,000 approach plates at more than 2,900 airports. FliteCharts are not geo-referenced. We offer updates every 28 days.

Get XM WX Satellite Weather on the GMX 200 when you add GDL 69. Receive and display graphical weather including NEXRAD, METARs, TAFs, TFRs, winds aloft, echo tops, precipitation type at the surface, lightning strikes, storm-cell data, AIRMETs and SIGMETs — regardless of altitude. Combine animated NEXRAD images with the maximum zoom range of 2500nm, and you have a nationwide view of weather presented on 1 screen. With the GDL 69A, you'll also be able to get the more than 150 channels of SiriusXM Satellite Radio in your aircraft (subscription required).